Home > What I Do > Writing / Speaking > The Universal Translator Homily

This is a homily I wrote and presented at the Unitarian Universalist Church of Indianapolis in August of 2006.

Download this piece as an Adobe Acrobat file (will open in a new tab or window). 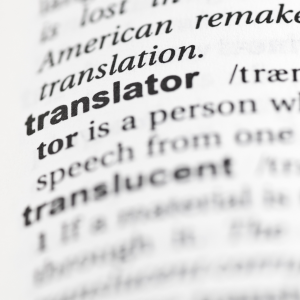 When Becky Elliot volunteered to take charge of this service – her very last as a worship associate – I quickly agreed to help. In the two years I’ve served as a Worship Associate, I haven’t had the opportunity to work directly with her. I was certain the experience would be stimulating and fun.

Her fascinating topic choice has been stimulating to be sure. I’m not sure about the fun part.

At first it seemed easy enough….we’d talk about the way in which we all have to translate in order to get along with each other. This happens in every arena of our lives. As a professional grantwriter, I translated one industry’s lingo into my own language and ultimately into a funder’s language. As a conductor, I translate printed music into sound. As a mother, I translate what’s really being said by my 7 and 14 year old daughters. As a wife, I translate not only what’s being said but also its context within in a 25-year relationship.

But translating the language of spirit and faith – now that’s a very different matter. As I thought about this initially, I thought, “Well, I’m pretty good at that. After all, I’m a Unitarian Universalist with some knowledge about the world’s religions and I try hard to respect them all.” I believed I had what might be called a universal translator on matters of faith. You star trek fans will remember the universal translator; every starship had one so they could understand all cultures across the galaxy.

I must confess that I felt kinda smug about my universal translator. You can tell me what ever you want about your spiritual beliefs and practices, the name and attributes of your deity, or your firm belief that God is a human invention. I will listen and accept.

Well that feeling didn’t last long. After some more thought, I had two startling realizations:

More on realization #1: In 2005 6 beautiful people in my family died within 11 months. It was a terrible year, and one thing I remember is the language at the funerals. I heard things like…”God has called them home…you’ll see them in heaven…you better get saved if you wanna see them in heaven!” Because these words were NOT part of my beliefs they did nothing to help me process my loss or find a path toward healing. It just made me mad as a snake. Clearly, my grief totally blocked the efficiency of my universal translator, and just perhaps, illuminated that it wasn’t working all that well in the first place.

I did get a lesson on this translation stuff at my Grandma’s funeral though. As I approached her casket to say goodbye, I noticed that she had a rosary clasped between her hands. Not only was Grandma not Catholic, she wasn’t even Christian! I made a beeline for my Mom, seeking explanations. She replied that my Grandma’s daughter-in-law, who had watched over and cared for Grandma for some time, wanted Grandma to have the rosary. We giggled about it from the pews, wondering what Grandma would have thought. She was a generous woman, my Grandma, and I realized that she would have simply smiled, understanding that love was the motivator. Love often is the motivating force, and that is what we must remember.

Back to the second realization: While I’m willing to listen to your beliefs, I am less willing to talk about my own for fear that a) I can’t articulate them right and/or b) you don’t have a universal spiritual translator.

Point a) I am afraid to talk about my own spiritual beliefs…even with, and perhaps especially with, other Unitarian Universalists. I don’t really have any clue what most of you believe. Don noted a couple of weeks ago that we have naturalists, theists, humanists, and mystics…and within each of these I’m sure beliefs are widely varied. At least when I’m talking to a Christian, Jew or Pagan, I have some framework. That’s not the case here.

I realized that because I’m UU and therefore not required to accept a specific creed or dogma, I haven’t taken the initiative to articulate my own beliefs. Some of you might say, well, that’s why we come here…we aren’t forced into a corner, we are here to embrace the principle — a free an responsible search for truth and meaning.
But is this search really meaningful if it’s solitary, if we don’t share it? A quote by Alice Walker got me thinking about this…”They don’t come to church to find God,” she says, “they come to church to share God.” But how can we share God, or our ideas of the divine (or lack thereof), if we don’t talk and explore these ideas with each other? How can we find the common ground between us if we don’t articulate this particularity to one another, heart to heart? How can we effectively bridge these four camps of thought and practice when we gather as a whole community for work and worship?

We ask our children at UUI to do this. My daughter Ruth and her peers in the Coming of Age program each stood before us last May and dared to speak their spiritual truths. That day after the service I heard many people say they wish they had both the words and the courage.

Now. On to Point B. I’m very nervous about speaking my thoughts aloud in this community because I am afraid, really afraid, that you won’t engage your universal translator. Some of this is just my own fear. Some of this arises from experience …like in yesterday’s workshop. In the facilitator’s handout was the question, “Where and how is God active in this congregation.” The group response was laughter and there seemed to be an unstated assumption that this question had no value in this community. But for me, it does have value.

Despite that though, I’m gonna risk it. Even though I’m worried that you’ll think I’m crazy, or that you’ll be reluctant to come to church the next time I’m in the pulpit, or that you might actually laugh at me privately, I’m gonna emulate the bravery of my daughter and tell you what I believe.

While I was on sabbatical last fall, at time when my life had fallen sharply out of balance, dozens of spiders built webs around my front door. I know they were telling me to get my life back in balance, to re-weave the thin, but strong connections that make me whole. They disappeared when I did. And it’s no surprise to me that this very week – when I was gone every night for meetings, busy getting the kids back in school, and getting chorus started again, that a very big and scary looking spider built a web across the ENTIRE front door for several days.

And that’s what I believe. I don’t really have a good label for all this…sometimes I refer to myself as a Unitarian Universalist Baptist Pagan. But even that’s not quite right.
(Drink some water) Woo, that’s a relief! Hey, I survived! I didn’t explode and no one has walked out . And you know what, that felt really really good.

I can’t imagine why it took me 10 years in this church to finally say this….and heaven knows, I never thought the first time would be up here! Probably, it’s because I didn’t take advantage of the many small group opportunities for spiritual exploration here at UUI…the credo forum, chalice circles, Covenant of UU Pagans, UU Buddhists, and other adult education opportunities. I plan to get more involved in these.

And I hope to see you there….not just those of you who resonate with my beliefs, but also those who seek a genuine understanding of what other people in this congregation believe. I suspect we could all work a bit harder in understanding the “other” viewpoint; I know I need to.

And why not go to something that stretches you, that might not be your thing, but might teach you about someone else’s. You needn’t, for example, be a pagan, to attend one of the solstice or equinox rituals. Why not check it out? You might never come again, but I bet it would strengthen the capacity of your universal translator.

The point of all these explorations and conversation is clear to me. To be in community together harmoniously, I believe we must talk to one another more – heart to heart. We must listen deeply to the rich particularities within the cup of Unitarian Universalism. We must wear and work on our universal spiritual translator. And we must be patient and gentle with each other when the pain, fear, and grief we carry around with us causes this translator to malfunction. If we can do this, we will create a sacred container of love and safety at the personal level upon which the body and spirit of this church will grow.

Why We Sing – A Sermon