Home > What I Do > Projects / Ensembles

Here are some of my current and past activities. Check out upcoming events for what’s on the horizon next.

After completing the Community Choir Leadership Training Program of the Ubuntu Choir Network in 2015, my brother and I co-founded SongSquad Indianapolis, the city’s first non-auditioned, all ages singing group. Our motto is “paperless singing in a perfection-free zone!” All skill levels are welcome and no music reading ability is needed. Songs are taught in oral tradition.

SongSquad offers 3,12-week singing sessions per year and many special singing events. Drop-in cards are available for those with busy schedules. Check it out! 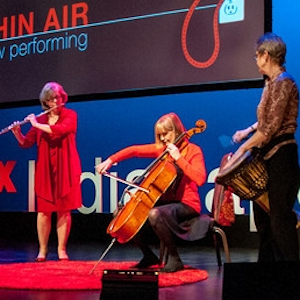 I perform with THIN AIR, a five-member ensemble of classically-trained instrumentalists (who also sing) that presents completely improvised performances. Our primary instruments are flute, clarinet, cello, violin, and percussion, but we play dozens more including ukulele, accordion, Bundt pan, kazoo, boomwhackers, and the occasional bell pepper.  I play the flute (transverse and Native American), hang drum, shruti box (a drone instrument), and whatever is nearby that might sound cool. Our performances frequently include audience participation because we believe all things and all people are musical. We are serious, seriously fun, and family friendly. See the upcoming events page for dates or contact Dianna Davis at dianna.davis [at] gmail [dot] com to book. 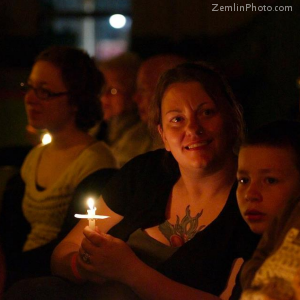 This family-friendly, non-denominational event celebrates the return of the sun, weaving stories and songs together for a night that ranges from meditative to raucous … all of it deeply powerful and joyous. It’s more than a performance, it’s more than a worship service. It’s a feast of sound and spirit. In the ten years since we first presented the ritual I have served principally as music director.  I work with numerous creative voices and minds to bring this beautiful ritual to life in Indianapolis for the general public and for incarcerated women at the Indiana Women’s Prison.  This beautiful and masterfully designed ritual was written by Julie Forest Middleton & Stasa Morgan-Appel and published by Emerald Earth.

Since 1998, I’ve directed the choir at the Midwest Unitarian Universalist Summer Assembly, a week-long summer camp. The 45 member choir prepares for and performs at four worship services.

Click here to watch a video of the MUUSA Awesome Choir singing my song, “It’s Time!”

I served as artistic director of the Indianapolis Women’s Chorus and its small ensemble Sapphonia from 1997-2010. These were seminal years where I explored new creative frontiers, produced two CDs, experimented with performances in-the-round, collaborated with interdisciplinary artists/organizations, and deepened my commitment to music as a powerful witness and vehicle for social change.

The first CD of the Indianapolis Women’s. The title cut is a commission by composer Gwyneth Walker on a text by Joan Baez. Includes the songs The Tree of Peace, Strange Fruit, The Small Difference, My Love Walks in Velvet, and Melodijas.

A live recording of the Indianapolis Women’s Chorus’s June 2004 tribute to the women of WWII. Selections include Rosie the Riveter; Boogie Woogie Bugle Boy; Tzena, Tzena; Cradle of Fire; and the piece commissioned to celebrate the  chorus’s 10th anniversary, The Beauty of Our Dreams, composed by Joan Szymko.

Inspired by Sue Coffee’s work with Sound Circle in ON BODIES, Spirit Matters was an innovative performance that featured original works (monologues, songs, prayer sticks, and more) created by members of the Indianapolis Women’s Chorus. The performance combined original artworks in all disciplines created by chorus members; the premier of a new work by nationally known composer Jennifer Stasack; and choral music that linked chorus-created works together to construct a meaningful, entertaining, and interactive performance experience (done in-the-round) that explored spiritual journeys.

The Spirit & Place Festival is a civic celebration that promotes civic engagement through collaborations among the arts, humanities, and religion, principally through a 10-day festival that features 40 events (exhibits, performances, panel discussions and more) hosted in venues throughout Central Indiana.  Founded in 1996, the festival’s grassroots model is unique among arts and humanities festivals in the U.S. I’ve served as director since 2006.

Here are a handful of festival programs that were especially fun for me.

This innovative concert by the Indianapolis Women’s Chorus was a partnership with the Eiteljorg Museum of Native American and Western Art. It featured game-like music including throat-singing led by visiting Inuit artists, clever-rounds and playful arrangements, and an original composition by Sally Childs-Helton for boomwhackers and based on the children’s song, Miss Mary Mack.

A partnership with Know No Stranger, GAMESPOT was a series of 80 place-based games printed on large sidewalk decals in Indianapolis’s six cultural districts. This project was part of the Spirit & Place Festival’s celebration of the theme PLAY in 2012.  Click here to access more information in an Adobe Acrobat document (will open in a new tab or window).

THIN AIR, an improvisational band of five women, offered a family concert designed around the themes of a seven course meal. The performance included an improvisation on vegetables (carrot flutes and bell pepper trumpets), a Bundt pan meditation, numerous instrumental and sung improvisations, and lots of audience singing about food. This festival event was part to the celebration of the theme of FOOD in 2010.

Susurrus,  a site specific dance ensemble, collaborated with the Indianapolis Women’s Chorus to create “Waterways,” an innovative, site-specific performance that traveled along several blocks along the downtown canal in Indianapolis. It  combined live choral music (both composed and improvised) and contemporary dance/movement (900 attended over 3 days).

A project of Studio Ninety Six, this event  was an interfaith event featuring local storytellers and musicians from Muslim, Jewish, and Christian traditions. In the shadow of 9/11, the experience allowed us to explore our relationships with each other, with all of creation, and with the divine.

Presented as part of my Creative Renewal Arts Fellowship (awarded by the Arts Council of Indianapolis in 2003), I led a program of reflections and performances about chants from Gregorian, Maori, Pagan, and other traditions. The program included an improvisation with colleague Marg Herder over a recording of Indiana’s 17 year locusts, and concluded with a spiral dance and chant with the audience.

Founded and conducted a weekend choral intensive for 70-90 Unitarian Universalists from  Kentucky, Indiana, Illinois, Ohio, Michigan and Pennsylvania that culminated in a Sunday service. I prepared the choir, designed the service, and delivered the sermon.

I served as project leader and music director for this day-long extravaganza that celebrated the “big tent” of Unitarian Universalism. The event was a revival-style event that included workshops in drumming, chanting, cairn-building, and art-making, plus a youth-led worship service, rock concert by Cobalt and the Hired Guns, a community meal, and firebrand preaching from humorist and writer Rev. Meg Barnhouse, along with Rev. Bill Breeden and Rev. Stephen Sinclair. The evening worship also featured a 40+ member choir from eight congregations. Funded by the UUA Fund for UUism and the Community Beacon Fund of the Unitarian Universalist Church of Indianapolis, this project was a collaboration of seven congregations and was attended by over 400 UUs from 11 states.

Check out the comprehensive information sheet by clicking here.  This Adobe Acrobat document will open in a new tab or window.

Rev. Stephen Sinclair and I designed a weekly contemplative service that combined improvisational music (instrumental and voice), readings, prayer, and a short homily.